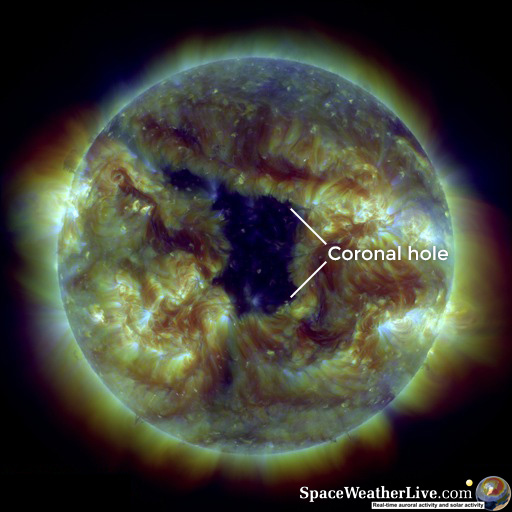 The magnetic field of a coronal hole is different than the rest of the Sun. Instead of returning to the surface, these magnetic field lines stay open and stretch out into space. At the moment we do not yet know where they reconnect. Instead of keeping the hot gas together, these open magnetic field lines cause a coronal hole to form, where solar wind can escape at high speeds. When a coronal hole is positioned near the centre of the Earth-facing solar disk, these hot gasses flow towards Earth at a higher speed than the regular solar wind and cause geomagnetic disturbances on Earth with enhanced auroral activity. Depending on the size and location of the coronal hole on the disk, more or less auroral activity can be expected. Large coronal holes often result in faster solar wind than smaller coronal holes. Coronal holes are usually not interesting for aurora watchers at the middle latitudes and only occasionally cause geomagnetic storm conditions.

How do I recognize a coronal hole stream? Bild: Geometry of the interaction between fast solar wind and ambient solar wind.

I dag i historien*